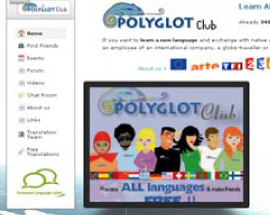 A polyglot is one who is able to speak or write several different languages.

The Polyglot Club is a place where one gets to practice those languages with native speakers from all over the world.

Vincent Scheidecker started this multilingual club in 2003. It all began with a simple ad he posted in a small Parisian magazine, seeking a French-Chinese language exchange. The response to the ad was overwhelming and soon after Scheidecker developed the Polyglot Club where others could also benefit from the online source which facilitates the development of language exchanges.

For some, learning languages in an academic setting can only go so far. Sure, they could learn all the verb tenses, grammar rules and the exception to those rules, but when it comes to practical usage of the language something is amiss. Language learning is different for everybody. Michael Erard, author of Babel No More, explained in an article from the CBC that “Hyperpolyglots are people who have learned how they learn. They know their cognitive style, they know the strategies that work better for them, they know their environment, and the resources they have access to.”

The same can apply to polyglots. It seems like the 350, 000 members of the Polyglot Club might have found a creative way that works for them… learning a new language and honing their language skills through connecting with other members like them in ideal social exchange settings.

Registration is free and the online forum is where one can connect with others who speak the language they would like to learn and vice-versa. In addition, the site includes language learning videos, chat rooms and language tests.

In Paris, the Monday meet-ups are reserved for Chinese, Wednesdays are for English, Spanish or German while the rest of the week days are multilingual days. Usually the meetings take place in a bar, and the only requirement is wearing a label indicating the languages that could be practiced with others.

Interestingly, native Anglophone speakers are a minority at these Parisian club meetings and Scheidecker sought to improve English participation by creating these special “Fifty-Fifty” events where everyone converses for one hour in French before switching to English for the next hour.

Let it be in France, or the many other places language exchange meetings or being held, like Russia and Ecuador, the whole idea of the Polyglot Club is to learn languages while making friends. And perhaps for many eager polyglots, that is the best way for them to learn a new language and practice their language skills.

Previous post Two Books about the Origins of the English Language