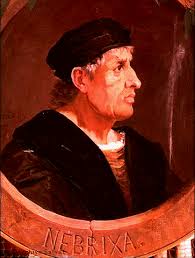 In the history of Spanish, it’s hard to imagine a character more important than Antonio de Nebrija. In the 15th century, Nebrija wrote the first veritable “grammar” of Spanish and made Spanish the first vernacular Latin language to be defined. He then went on to write the most complete Spanish dictionary to date. Both were published at the end of July, 1492.

Nebrija’s Castilian Grammar was actually a bit of an accident. The scholar’s real passion was for Latin. Discouraged by the deteriorating teaching standards of Latin in Spain at the time, he set out raise them by writing a Latin grammar all Spaniards could use. The problem? Soon after publishing the Latin Grammar, he realized that to get more Spaniards to read it, he needed to translate his work into Spanish.

In 1492, just before Columbus set sail for the New World, Nebrija published the Gramática de la lengua castellana. Latin and Greek were the teaching languages at the time and most people didn’t even think Castilian had a grammar. It turned out that Spanish did have a grammar.

What was so important about writing a Spanish grammar? Nebrija was the first scholar to figure out what the grammar rules of Spanish were, then put them in order and write them down. While doing this, he established one of the key features of Spanish to this day: its tendency towards phonetic spellings. In the introduction of the Gramática, Nebrija clearly stated his guiding principal: adecuar la escritura a la pronunciación (to make Spanish writing conform to pronunciation).

The same year Nebrija published the Gramática, he published a dictionary of Spanish. Though he was not the first scholar to write a Spanish dictionary, Nebrija did set a new standard by including over thirty thousand entries.

With the Castilian Grammar and the Spanish dictionary, Nebrija set Spanish on the path to glory. The next century would see the beginning of the Golden Age of Spanish literature.

Next post The Real Story of the French Language Police