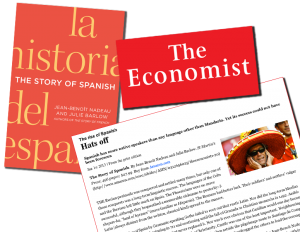 Nadeau Barlowlunes, agosto 31st, 2020 at 8:55pm
The BBC interviewed Julie for this article about the great French tradition of complaining. As writer Emily Monaco says: "After years of living in France, I was finally building intimacy with locals; I just hadn’t known I would have to complain so much to get there." Ha!

Why the French love to complain
In France, a complaint is an appropriate and frequent conversation starter – but the appropriateness of when, to whom and about what to complain is a delicate art.
bbc.com
8    Ver en Facebook

Nadeau Barlowmiércoles, julio 15th, 2020 at 1:25pm
A Saudi newspaper announces a new French language edition. Why not? "We believe that French-speaking communities, regardless of their geographical locations, deserve to know more about us, from us and in their language."

Yes, oui can: Why Arab News is launching in French
“I have always loved the desert. One sits down on a desert sand dune, sees nothing, hears nothing. Yet through the silence something throbs, and gleams ... What makes the desert beautiful is that somewhere it hides a well.”
arabnews.com
3    Ver en Facebook