The Real Story of the French Language Police 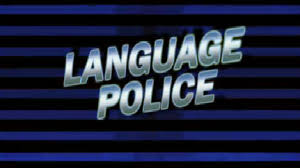 On a website for expats living in France I ran across an interesting list of English words that the French are supposedly trying to “ban.” These included “crowd-funding,” “cloud computing,” and “drop-out.”

The site was asking users whether the efforts of the French “language police” were “honorable” or “futile.”

But the question is just silly.

First, there is no “language police” in France. France has a government office called the Délégation générale à la langue française et aux langues de France (General delegation for the French language and languages of France) or DGLFLF. Its job, among other things, is to figure out what English words are creeping into French, then come up with alternatives in French. The idea is not so much to “ban” English as to keep the French language up to date.

They sure don’t operate like “police.” The DGLFLF comes up with French equivalents, then sends them to the Commission générale de terminologie et néologie, which is part of the Prime Minister’s office, for approval. Roughly 70% are approved.

The terms become “obligatory” in written material produced by French civil servants working in the specific fields where each word applies.

But these so-called “police” have about as much power as shopping mall security officers. No one can control how people on the street speak – not in France, and not anywhere.

Just about every national language in the world – with the notable exception of English – has a body similar to the DGLFLF (and when French terms were creeping into English in the 19th century, British and American lexicographers and editors worked to anglicize them). Spain has two different organizations working on replacing English vocabulary: the Real Academia Española and a foundation called Fundéu BBVA.

What’s more – and we discuss this in our book The Story of French – the French aren’t even very good at inventing new vocabulary! They generally turn to Quebec for ideas, where the Office québécois de la langue française does a much better job of finding French equivalents for English terms.

Quebec actually has created French equivalents for a number of the words on the list from the expat’s website, including:

Quebec has just frenchified other English terms like “blog,” which became blogue, and can be turned into the verb bloguer, and the noun blogueur – the French tried bloc-note, but the expression fell flat because it did not lend itself well to derivatives.

Interestingly, in Quebec at least, these French terms all made it to the street and have become part of popular vocabulary.

And no police muscle was required….

Next post Why Does Spanish Have Two Different Words for “To Be”?