The Story of Spanish: Now in Bookstores 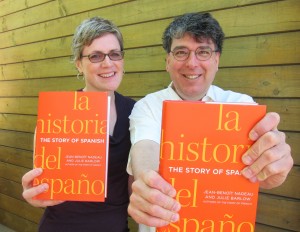 Today’s the day! More than three years after we started researching and writing The Story of Spanish, it’s finally in stores (and available on Amazon, IndieBound, at Barnes & Noble, Chapters-Indigo and MacMillan)!

It’s funny, we’re kicking off the publication with a piece we published in the Wall Street Journal last week called Cinco de Mayo No Hecho en Mèxico, Actually. And interestingly, we actually got the original idea for the book in Puebla – site of the Cinco de Mayo battle – when Julie was there learning Spanish in 2006. At one point, she looked around her classroom and realized that all of her classmates were professionals, who like her, had taken a month out of their lives to learn Spanish. They all told her they “needed” Spanish for their work. She wondered,  “Why do so many Americans suddenly want to learn Spanish?” and “Why is Spanish suddenly so important in the U.S.?”

The Story of Spanish uncovers surprising answers to those questions, among other things. We actually had lots of surprises over the course of the research, like learning just how many cultures influenced the birth and evolution of Spanish, from the Phoenicians to the Germans, from the Arabs to the French. Some of the personalities that forged Spanish really blew our minds, from the 13th century Castilian King who – out of the blue – decided to transform Spanish into a respectable language of culture, to the Catalan literary agent who single-handedly created the Latin American Boom.

While we were writing The Story of Spanish, we thought of this book as a “biography” of the Spanish language. Our aim was to tell the story of all the people and circumstances that shaped Spanish over the course of its life…so far. Some of these stories involve religious fervor, imperial ambition, geopolitics, plain old greed and the thirst for adventure. Others are about artistic and literary ambitions, fashion, the thirst for knowledge– and, last but not least, plain old business sense.

And speaking of business…The Story of Spanish is now in stores!

Booklist calls The Story of Spanish “part travelogue” and that’s also true: there is a bit of our friend Jacques’ Nicaraguan wedding in it, anecdotes from our trip to Cuba, stories from Jean-Benoît’s cave exploring expeditions in Mexico, Julie’s travels in Andalusia, and, of course, many stories from our six months living in Arizona.

Next post The Story of Spanish: Now in Bookstores