Will the World End on December 21st? 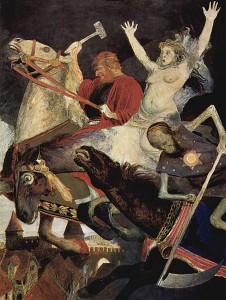 The prediction that the world will end on December 21st or 22nd is actually the 183rd one that we know of – since Nostradamus predicted the end of the world in 1555. In other words, over the last four and a half centuries, the world should have ended every two and a half years.

But supposedly this is the Big One. The proof? The Mayan calendar is coming to the end of a long 5000-year cycle.

However, there is a big problem with this reasoning. The way calendars work, when one cycle ends, another one starts. It’s like a clock. When the hands have gone around once, they start again. Cars don’t explode when they reach 100 000 kilometers on the meter: the meter rolls over to 100 001. No one thinks there’s anything amazing about that, except maybe watching five digits roll over into six. So why would the end of a calendar cycle necessary spell doom?

There’s another problem with this End of the World prophecy: we are not really in 2012.

Yes, you read right: our calendar (the Gregorian calendar) is loaded with errors in calculations accumulated over centuries.

The mistakes started in A.D. 532 – 970 years before Columbus discovered the Americas – when a monk, Dennis the Short, took it upon himself to calculate the year of Christ’s birth. It was the Middle Ages and people still didn’t count that well – actually, they used a mix of Roman numerals and finger counting.

But according to Dennis’ calculations, Jesus was actually born in 4 B.C. – or 4 years before Christ!

And there’s more… Like everyone else in Europe at the time, Dennis didn’t know about the zero yet. The Arabs would introduce the concept three centuries later. So Dennis actually made the calendar jump from 1. B.C. to A.D. 1 without stopping at zero.  That’s why Jesus is born on year 1.

Given the errors in Dennis’ calculations, the year 2000 was in fact in 1996 or 1997, depending on your position on the year-zero issue.

In other words, dates have all been wrong for 15 centuries – or 60 generations.

There are other incongruities. If the birth of Jesus determined the beginning of the calendar, why is his date of birth December 25th and not January 1st? And things get even more perplexing when you consider that in Dennis the Short’s calculation, the beginning of the year was April 1st.

Any way you look at it, 2012 is not today’s actual year. So anyone who is making a prediction based on correlations between a faulty calendar like ours and that of the Mayans, is most certainly making a presumptuous leap of logic. We’re most probably in 2016, not 2012.

The great mystery is why the people in Abrahamic religions – Christian, Jewish and Muslim – have such a strong apocalyptic impulse. Their religions have even developed their own branch of theology, called eschatology – which is the science of the study of the end of time.

No matter what faith Westerners adhere to, they always build in an “end-is-nigh” vision. Even if nature is their religion, they develop their own scientific fantasy of an environmental apocalypse. If they believe in money, socialism is the end; if they are communists, it’s capitalism; if they believe in weapons, they become survivalists.

Even scientists can’t resist drawing end-of-the-world scenarios. There was Carl Sagan and his nuclear apocalypse. And there were the computer scientists with their Y2K bug.

This fixation on apocalypses gets recycled through pop culture, where it takes the form of hundreds of end-of-the-world films, thousands of novels and novellas, all feeding on our morbid fascination for the definite end.

That fascination is one thing that really never really ends – along with the world.