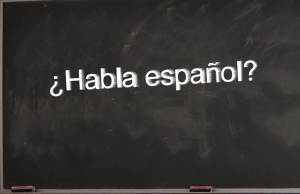 When it comes to learning new languages, we all have our own reasons. Let it be for personal development, career advancement or maybe even to be able to read a book in its language of origin, the reasons are numerous and varied.

In a recent feature in the Huffington Post, “17 Reasons Every American Should Learn Spanish” many appealing reasons for learning Spanish were listed. Among them: “reduces the risk of Alzheimer” and “it makes you smarter.”

What were your reasons for learning Spanish? We would be interested to know why our readers joined millions of others in learning a language that is the mother tongue of over 450 million people worldwide.

The reasons why Jean-Benoît Nadeau and Julie Barlow learned Spanish might be different but they are equally important. Below, discover why the authors of The Story of Spanish decided to learn the language of Cervantes.

I originally started learning Spanish in 1989 because I was dying to travel to Central America, a Cold War hot spot at the time. Unfortunately I never got to Central America and I had to put Spanish on the back burner.

I was living in Quebec so my first priority was learning French. When I got back to studying Spanish 20 years later, it was so I could write The Story of Spanish with some competence. But in some ways, the book was a just an excuse to learn Spanish. I still felt the same pull towards the language, and for similar reasons. Of course, the Cold War was over, but there was still an entire cultural, economic and political universe peopled by some 450 million Spanish speakers that was as impenetrable to me without Spanish.

I think it’s important to learn Spanish because it allows you to walk through walls into new realities. I hope I will be able to use writing books as an excuse to learn new languages for the rest of my life.

l learned Spanish at the end of the 1980s for very particular reasons. By the late 80s, I had already been to Mexico twice on big trips. The first was an off the beaten path tourist trip at 16 and the other was a speleological expedition at 22 (which was even more off the beaten path, especially since there were no paths). Interestingly, my travels to Mexico marked that period of time associated with the end of childhood and the beginning of adulthood.

The trip in 1981, when I was 16, was with a group of 13 youths. It was a part of nine-week voyage across North America in a full-size Econoline van towing along a U-Haul trailer.  We did it all: leaving from Montreal we went to Rushmore, then Yellowstone, then San Francisco, Los Angeles, spent two weeks in Mexico, then headed to San Antonio, New Orleans, Washington, New York and finally back home to Montreal. Naturally, being 16, I did not care much about other languages, but I came back feeling silly for not knowing Spanish.

The leg across Mexico blew my mind. We started in Nogales and headed towards Chihuahua, then Durango, and then across the Mountains to Puerto Vallarta (which at the time was not at all developed). We then headed once more across the mountains towards Guadalajara, Mexico City, Taxco and back north through Monterrey. These were the years when the Mexican Boom had ended with a depression, yet I was stunned by all there was to see. However, I also realized how much I did not get because I did not speak Spanish.

Then six years later in 1987, I was 22, in my first year at McGill and I joined a group of Quebeckers who were going to explore the yet unknown caves of the Sierra Negra, southeast of Puebla. It was a major trek and personally gratifying, although physically challenging. On a human level, it was just as challenging since very few among us spoke Spanish (I was not yet among them) and the locals spoke Spanish as a second language since most were either Nahua or Mazateca natives.

It is from that last experience that I decided to take a full-year two-term course in Spanish. In consequence, by 1990, when I returned for yet another expedition to the Sierra Negra, I was ahead of the game because I was fluent in Spanish.

It has proven useful to me ever since. Especially while visiting other Spanish-speaking countries: Nicaragua, Cuba, Spain and, yes, Arizona…

More information about the Spanish language can be found in our new book, The Story of Spanish, (to be released in April 2013, St. Martin’s Press).