Why Does Spanish Have Two Different Words for “To Be”? 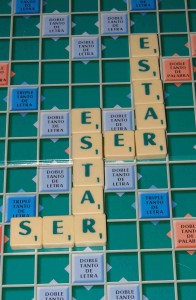 The question torments just about everyone trying to learn Spanish. The answer comes from the early history of Spanish.

The origins of Spanish are, of course, Latin, but not Classical Latin, as most people probably assume.

Many empires passed through ancient Iberia before the Romans conquered it in 197 BC. The Romans were the first to get the inhabitants to speak their language. In about 250 years, they managed to get most of Iberia speaking Latin.

Yet, the Romans didn’t spread Classical Latin. The Roman soldiers themselves communicated in a popular version of Latin, known as Vulgar Latin, and it was this language locals picked up.

By “Vulgar,” we do not mean rude, or obscene. The Latin word vulgus means “common people.” Vulgar Latin is just common, spoken Latin. We know very little about it since it was hardly ever written down, so there are few traces of it.

Then, around the 9th century, the languages in each area of the former Roman Empire – including Spanish – started to develop into distinct languages.

The inhabitants of Hispania had been adapting Vulgar Latin to their own needs over the centuries, just like the inhabitants of what would later become France and Italy. They did this mostly to make the language more useful in daily life. Like in Italy and France, speakers in Hispania added new features like articles and prepositions, made up new words, simplified the Latin genders and added tones of familiarity and humor to make Latin more accessible.

However, in Hispania, the language acquired a few distinctive twists. One was to add a vowel (called an epenthetic vowel) to the beginning of words that started with “s.” Latin words like sperare, spiritus and spatha acquired an -e at the beginning, and became esperar (to wait), espiritu (spirit) and espada (sword) in Spanish.

It was during this period that Iberians developed two different verbs for “to be.” Classical Latin has only one verb for “to be,” esse. This became essere in Vulgar Latin, and went on to be ser in Spanish. But in Hispania, for reasons no one fully understands, speakers created a second verb for “to be,” stare, which had the sense of “to stand.” So Spanish has ser (to be, in essence) and estar (to be, in state).

More information on how the Spanish language acquired some of its particular features can be found in The Story of Spanish (St. Martin’s Press).

Previous post The Real Story of the French Language Police

The Useless French Language and Why We Learn it