Viva Florida 500: The Anniversary of Arriving in America 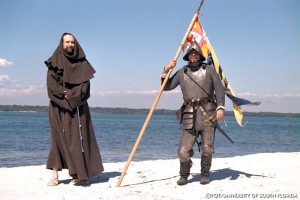 American history buffs are spit-shining their conquistador helmets and cleaning their harquebuses, getting ready to commemorate the very first 500th anniversary of landing on American soil this April 2, 2013.

A half millennium ago, on Easter day 1513, Spanish explorer Juan Ponce de León first spotted the coast he called la Florida. It means the festival or feast of flowers and it is a term that refers to the Spanish Easter season. After landing the next day, he kick-started five centuries of European presence in North America.

All through 2013, the State of Florida will commemorate this important milestone by organizing more than 200 events under the brand Viva Florida 500. Florida’s quincentennial actually inaugurates a whole century of other Spanish-related quincentennials in the U.S.: the Spanish were present in continental U.S. for 94 years prior to the founding of Jamestown (the first permanent English settlement in the Americas).

Although Ponce de León kept a journal, what’s most fascinating about the period is how much he missed out on. Naturally, he knew nothing of the natives’ languages and could neither understand nor communicate with them.

Ponce de León attempted to settle la Florida in 1521, but the settlers were driven away by an attack from natives. Ponce de León died of his wounds shortly after in Havana.

Florida would not be settled until 1565, with the founding of St. Augustine by the Spanish explorer Pedro Menéndez de Avilés. By then, explorers and Conquistadores had established that there wasn’t any easy gold to be found north of Cuba and Mexico – a large swathe of land that was not only void of gold but difficult to settle because it was either too arid or too wet.

Because the Spanish were the first to land on American soil, the oldest written records of U.S. history—mission charters, contracts, deeds, oaths, diplomas and correspondence— were written in Spanish by conquistadores and missionaries, notaries, alcaldes (mayors), empresarios (entrepreneurs), and soldados (soldiers). These men would hammer the very first European terms describing American nature and native customs – from tornados to ramadas, to shacks and chaps.

And that all happened in Spanish.

More about the Spanish history of America can be found in our new book, The Story of Spanish, to be released in May 2013, St. Martin’s Press.

Next post Not All Americans Speak English at Home