The Wall Street Journal Reviews The Story of Spanish 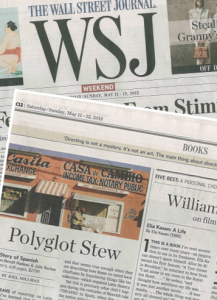 Our first newspaper review in The Wall Street Journal, by the paper’s former Latin American correspondent, Joel Millman, came out recently. He praises the book as “part linguistic primer, part cultural history,” and calls The Story of Spanish “entertaining,” and says it “zips along crisply.”

But strangely, he criticizes us for writing more about “Spanish speakers”  than about Spanish. Curious, since the point of the book is to explain how Spanish grew and spread. It’s hard to imagine how that could have happened without the people who spoke it.
Read the review »

Previous post CBC Radio Interview on The Story of Spanish