La Rentrée: Back to School in France (Part 2) 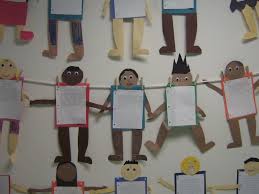 At the end of our girls’ first day of school, the teachers flowed out onto the sidewalk in front of the school to greet parents. We’re amazed at this easy, casual school culture – again, not what we were expecting. Julie had predicted that Nathalie and Erika’s English skills would set them apart and she was right. Nathalie’s teacher, Monsieur Jelila, told us he wanted to keep her in his class “for purely selfish reasons” – she could help him teach English! At a parent-teacher meeting the next week, no less than four parents asked the same question: “How much English instruction will there be?” No other subject provoked as much interest.

The first day after school, Erika asks us why her school didn’t have a name. It’s a bit hard to explain to a 10-year-old with almost no references in French culture, but we tried. Historically, part of the “program” of France’s national education system – which dates back to the 19th century – was to break up parish identities, elites, networks and other factions that competed with the single, national, French identity promulgated since the French Revolution. Schools in Quebec are often named after the parishes where they are located. In France, they have the name of the street where they are located. So our school is l’école de la rue de l’Arbalète. Period.

Again, our experience with the French Republic had taught us to expect rigidity and regimentation. We weren’t totally wrong – kids call their teacher Maître (master). But Nathalie and Erika’s teachers actually turned out to have completely different approaches and philosophies. Erika’s teacher, Madame Petit, wants her kids to develop at their own pace, without undue pressure. Her motto seems to be, “C’est pas grave” (“No big deal”). Nathalie’s teacher, Monsieur Jelila, isn’t interested in following the program. He has a big, colourful personality and appears to scorn authority in some instances as passionately as he adheres to it in others. We are anxious to see if our girls will actually end up learning the same thing.

Previous post La Rentrée: Back to School in Paris (Part I)