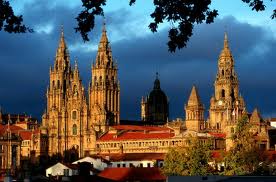 July 25th is the Festival of St. James the Apostle in Santiago de Compostela, Spain. Every year, thousands of people participate in festivities in this town on the western tip of Spain – involving fireworks, parades and traditional music – to celebrate St. John the Apostle, believed to be the buried here.

Yet few know how the burial site of St. James the Apostle set Castilian on the path to become the language of Spain.

The burial site was discovered and became a shrine in 813. Originally called Sanctus Jacobus, it became Santi-Iago, then Santiago de Compostela (which means “field of the stars”). In the 9th century, thousands of devout European Christians flocked to the shrine along a pilgrimage route that started in the Basque country and crossed the rugged, mountainous terrain of northern Spain.

The route, which came to be known as the Camino de Santiago, put northern Spain on the map. At the time, northern Spain was just a string of small, remote kingdoms. The only part of the Iberian Peninsula not under Muslim control, it held little interest to the outside world.

All that changed with the discovery of St. James’ burial site. The creation of the Camino de Santiago, which brought thousands of travelers to northern Spain – notably from France. French pilgrims brought merchants and juglares (jugglers), as the early troubadours were known. French Kings started to marry their offspring with princes and princess from Spain’s north.

The French, in fact, were largely responsible for developing the Camino de Santiago. They built Gothic Cathedrals along the pilgrim route – some of which are still standing today. French culture became so influential in northern Spain that the Iberians changed their script from Visigothic characters to the more compact French Carolingian script.

The French even shaped the very name Spaniards called themselves, and their language: español. Before the French, it would never have occurred to the inhabitants of these Kingdoms – Galicia, Navarre, Castile and Leon – that they shared anything. The southern French, who spoke Occitan, also known as Langue d’Oc, threw all the Iberians into on basket and called them espainol or españón, a deformation of the Latin Hispaniolus.

More importantly, the interest of France, and the sudden influx of foreign visitors completely changed the idea the northerners had of themselves. This new confidence propelled the northern Spanish to start fighting the Muslims, who at the time occupied two-thirds of today’s Spain.

It was the warriors of the Kingdom of Castile’s who would take the lead in this battle, which would come to be known as the Reconquista. Their power swelled as they moved south conquering one Muslim city after another. And their language spread with them.

Over the next centuries, the language of Castile would evolve into modern Spanish. In our new book, The Story of Spanish (to be released in April 2013, St. Martin’s Press), we explain how this happened, then how Spanish travelled to the New World, became the tongue of an empire, and much more…

Next post July 30, 1492: How the Expulsion of Spain’s Jews Spread Spanish

Previous post How Many Academies Does it Take to Add Scientology to the Dictionary of the Royal Spanish Academy?