How Much is the Spanish Language Worth? 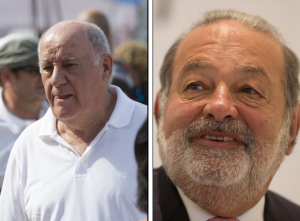 Forbes published yesterday its 2013 ranking of the world’s billionaires, and – surprise – two Hispanics, Carlos Slim Helù and Amancio Ortega, rank first and third. With a personal wealth estimated at 73 billion and 57 billion dollars respectively, the Mexican and the Spaniard are each richer than half of the countries of the earth.

The fact that two Hispanics rank this high can be explained by a simple fact: Spanish-speaking interests are important in the global economy, like selling telecom broadband, high-speed trains, airplane wings and real estate or developing global brands like Zara (Amancio Ortega’s creation).

And there are probably many more Spanish-speaking ultra-billionaires in the making. Despite the many hardships the Spanish-speaking world has suffered since the end of the colonial period, things have been looking up since the middle of the 1990s. Since 2000, middle-class families in the Americas have doubled.

Don’t let the bad news about Spain’s economy fool you. As dramatic as Spain’s economic problems have been since 2007, they haven’t sent Spain back to anything close to the state it was in at the lowest point of the Franco era, in the 1950s.

Americans, whether Hispanic or not, are starting to see what Spaniards, Argentines, Mexicans and Colombians saw long ago: that the Spanish language is a valuable asset in itself.

Interestingly, two Spanish foundations, those of the Santander Bank and Telecom company, Telefónica, even went through the trouble of estimating the exact monetary value of the Spanish language.

The initiative turned out to be a major intellectual endeavor, and it yielded surprisingly precise results. In 2003, the Santander study concluded that the Spanish language generated exactly 15 percent of Spain’s GDP.

In 2006, Fundación Telefónica went back to the drawing board and hired three economists with impeccable credentials to launch a more in depth study. In 2011, they came up with a slightly higher figure: 16 percent of Spain’s GDP.

Part of the study included a comparison of Spain and Poland, a country of comparable size and make up, but whose language is almost strictly national. In economic terms, you can study language by applying the principle of what economists call “club goods.” The researchers ask: To what extent does being part of the “club” of Spanish language accrue benefits to Spain?

While it is true that the Hispanic world has suffered from under investment in education and political instability, it is plain to see that in the last 60 years, it has begun to build on a common culture and the purchasing power of Hispanics – who account for 9% of the world’s GDP.

Clearly, the “Spanish club” has a lot of value to bank on.

More about the economic dimensions of the Spanish language can be found in our new book, The Story of Spanish, to be released May 2013 (St. Martin’s Press).

Next post Where Would the Spanish Language Be Without Venezuela?

Nadeau BarlowTuesday, April 19th, 2022 at 1:47pm
Julie spoke with the lovely Emilly Monaco, host on Paris Underground, about the how there's much more to the expression "bon appétit" than you think.
1    View on Facebook