History of the Spanish Language

Where did Spanish come from?

Just how did a quirky, obscure dialect spoken by a remote tribe of cattle farmers in northern Spain grow to become the common tongue of 400 million people in 22 countries? And why do so many people in Canada, Brazil, France and the United States want to learn Spanish today? 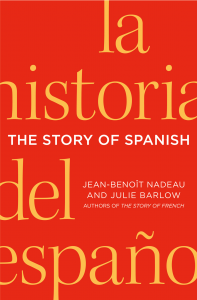 f Spanish, to be published by St. Martin’s Press, NY, in May 2013, will answer these questions and many more.

In the accessible style they have honed in their writing over the last decade, the authors will transport their readers back in time to the Roman Empire, the Kings of Castile and the New World explorers. Along the way, readers will discover Don Quixote, the Spanish Golden Age, the Liberator Simón Bolívar and great contemporary creators like Gabriel García Márquez and Pedro Almodovar – all of whom have influenced the destiny of the Spanish language.

through history. They explain why the portrait of king Alfonso X of Castile hangs in the U.S. Capitol and how the accent of Andalusia shaped American Spanish. They unearth surprising facts like why the Spanish peso was the currency of reference for U.S. trade until the 1850s, how vaqueros, estampidas and caballerangos became buckaroos, stampedes and wranglers – and who decided to put sour cream cheese on nachos.

The authors, Julie Barlow and Jean-Benoît Nadeau, are two trilingual Canadian writers, winners of dozens of journalism and literary prizes and well known as regular contributors to Quebec’s public affairs magazine, L’actualité. Their best-selling books on France and the French language have established them as experts in explaining cultural differences in the era of globalization.

In The Story of Spanish, readers will learn:

~ Why Spanish is so phonetic

~ Why Latinos love their music and telenovelas so much