History of the French Language 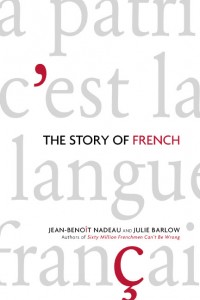 Is French really on the decline? Many believe so. To explain this demise, they point to the fact that French is “controlled” by an academy. They blame its complex rules, its speakers’ refusal to adopt words from other languages, the insecurity that pushes them to pass laws banning other languages, and to spend millions of dollars making sure literature, music and film are produced in French.So how do they explain the fact that French is actually growing? Its speakers have tripled in the last 60 years – to 200 million, in 63 countries. One hundred million people across the planet are studying French, which is second only to English for the number of countries where it is an official tongue.

This paradoxical picture is the background for the popular history, THE STORY OF FRENCH. In this colorful narrative, Canadian authors Jean-Benoît Nadeau and Julie Barlow unravel the mysteries of a language that has maintained its global influence in spite of the rise of English. They show how French acquired its own peculiar culture, one of intense rigid grammar rules, politicization and pride, but also of great creativity. And they speculate on what the future holds for French.

Based in Quebec, Canada, Nadeau and Barlow lived in France from 1999-2001. To write THE STORY OF FRENCH, they drew on their experience in France, and their home-base of Montreal, Canada. Then they travelled across the French-speaking world in Europe, Africa, the Middle East and the Americas. On their travels, they saw that French was not only thriving but growing.

As entertaining as it is informative, THE STORY OF FRENCH challenges our old ideas about French and shows why French is still the world’s other global language.

Next post The Story of French: Q & A With Julie Barlow (Part 2)

Previous post The Story of French: Q & A With Julie Barlow (Part 1)