Getting Around Paris in a Wheelchair 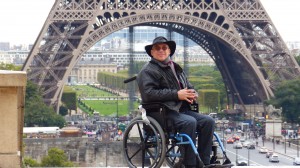 It started out like a dream. My travel companion and I wandered into France’s museum of modern art, the Centre Georges Pompidou. Smiling attendants greeted us and waved us through the ticket line. We swirled through the new retrospective of Pop Art icon Roy Lichtenstein, then popped in to the museum’s cafeteria for a lunch of quiche Lorraine and chocolate éclairs.

“Trust me, it’s not always like this,” my companion said.

He should know. Paul Nadler, 50, has traveled to six countries in a wheelchair. His last trip to Paris, eight years ago, was demoralizing. “I was convinced someone had put all the disabled people in a warehouse somewhere. There were no disabled people in Paris. And no way for them to get around.”

Though Paris can boast many things, accessibility for the disabled has never been one of them.

But things change, even in France. In 2005, the country passed a Handicap Law stipulating that by 2015, restaurants, movie theaters, hair salons, doctors’ offices, libraries, and all public services had to be accessible for people with hearing, visual, motor, and even intellectual disabilities.

Paul and I set out to see whether Paris had improved for people in wheelchairs. We had one week to see as many tourist attractions as possible.

Though I had lived here for three years, this was the first time I saw the City of Light through the eyes of a disabled traveler.

Things did not start well. At Orly Airport, an impatient businessman jumped into the line reserved for disabled passengers, and tried to grab our taxi. “There are lots of taxis anyway,” he complained.

We tried not to jump to conclusions.

At City Hall we interviewed Véronique Dubarry, director of services for the disabled. Curiously, Dubarry was quite down on Paris. “It’s hard to make a city renowned for its historical buildings accessible. The Paris Métro was built over a century ago. Some historic sites will never be accessible.”

And architecture was not the worst problem, she said. “It’s attitudes. The French think disabled people belong in the countryside, not in cities.”

Paul’s last impression of Paris was not so crazy, after all.

Our first destination was the opulent Grand Palais Museum, near the Champs-Élysées, to see the popular retrospective of French Cubist painter Georges Braque.

To our delight, the Grand Palais offered royal service. We entered through the service door and were escorted straight to the exhibit in the service elevator, avoiding the long lines. And like at many museums in Paris, admission was free for disabled visitors.

“I’m favorably impressed,” Paul said after the show. We left and rolled to the nearby Champs-Élysées, which was very accessible, since its sidewalks have ramps.

The secret to getting around Paris comfortably in a wheelchair, we learned, is taking the bus. Paris revamped its entire bus system early in the 2000s, equipping buses with ramps and reserved spaces for wheelchairs.

Our first bus trip worked like magic. When we boarded, people cleared out of the reserved space. An elderly gentleman even scolded a young mother who complained there was no room for her stroller. “But madame, disabled people come first.”

Unfortunately the bus system is not foolproof. That evening, we set off to experience the annual all-night contemporary art festival, La Nuit Blanche. When the first bus pulled up, we pushed the wheelchair button to open the access ramp, but the driver drove off. (The next driver was mortified when he heard this and apologized all the way to Place République.)

Our first destination was Japanese artist Fujiko Nakaya’s “Fog Square” at the Place République. Then we headed to a bustling cafe for a drink. To our relief, the hostess spotted the wheelchair and cleared us a corner table without a word. We were enchanted.

But then we had to tackle the subway to get home. The Paris Métro is known to be particularly hostile to the handicapped. Few stations have escalators, and even fewer have elevators. Paul can walk short distances with a cane, so we maneuvered through the Métro stairs carrying his chair.

Parisians are widely thought to be impervious to people with special needs — especially Métro riders. But to our surprise, passengers got up and offered us seats.

Of course, Parisians are as unpredictable as the weather. On the next Métro trip, passengers in the car refused to let us in.

Still, we soldiered on. Our next destination: the Museum of Modern Art of the City of Paris. The city claims all of its museums are accessible and things looked promising as we approached and a sign directed us to an elevator for disabled visitors.

Unfortunately, it was out of order. Two employees rushed up to explain. The museum was under construction, they claimed. But this was the least of our problems. The exhibit rooms had no access ramps and the museum was not worth the trouble of getting there.

The next afternoon, we headed to a free concert of the Orchestre Symphonique et Lyrique in a church in the Latin Quarter. We decided to take the “scenic” route through the neighborhood’s narrow winding streets. Although some sidewalks were barely broad enough for a wheelchair, passers-by graciously moved aside for us.

And when we arrived at the church, we were treated like royalty. An elderly gentleman ushered us straight to the reserved seating section, even though we had not reserved seats.

The next day, we tackled the ultimate challenge: a picnic overlooking the Seine River on the tip of Île St-Louis, the historic heart of Paris. Reaching the site meant rolling over cobblestone streets and climbing steep stairs, but Parisians — and tourists — jumped to our assistance.

We celebrated Paul’s last day here with a cup of the famous hot chocolate at the Left Bank cafe Les Deux Magots, in the St-Germain-des-Prés area. There was only one obstacle between us and our sweet treat: the antique revolving door. We managed to squeeze the chair in, and no one complained.

On the bus ride home from the Left Bank, a middle-aged woman in a wheelchair confirmed what Paul thought: Paris had made progress. “Ten years ago, there were no wheelchairs on the streets of Paris. Now, you can go anywhere,” she said.

So Paris passed the wheelchair test, with room for improvement.

Julie Barlow, coauthor of “Sixty Million Frenchmen Can’t Be Wrong,” can be reached at julie@nadeaubarlow.com.