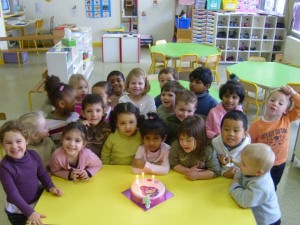 It has been a rough fall for French schools, although no one has exactly taken to the streets – yet.

In today’s news, France slipped to 25th place in the PISA international ranking of school systems (it ranked 23rd three years ago). Then last week, France had not one but two days of strikes in primary schools.

The upshot of the PISA report was that disparities between rich and poor schools in France have grown. It’s hard for us to judge. Our kids are in a “good” school in a fairly affluent neighbourhood in Paris. Schools in rougher neighbourhoods have evidently suffered a lot from reduced staffing.

But strangely, school performance is not what’s on most people’s minds. The “school week” has been the major education issue in the news. In September, François Hollande’s government introduced a new schedule for primary schools – adding an extra half-day of classes – ostensibly to improve performance by increasing teaching hours.

About a third of French schools adopted the new schedule, which was not compulsory. And after three months of trial and error, most of them, including ours, went on strike last week.

The problem? Up until this year, French primary school students were in class from 8 am to 4:30 pm every day except Wednesday, which was a day off.

Starting this year, Monday’s are regular days ending at 4:30, then kids go to school Tuesday until 3:00, Wednesday morning, Thursday till 4:30, then Friday till 3:00!

You can imagine the havoc this creates for families, particularly one where both parents work.

But it wasn’t the parents who went on strike. It was the teachers (who have to work more hours) and the city employees hired to lead a new roster of activities to fill the extra hours at school.

Basically, no one is happy. The animators want more money and resources. The teachers want fewer hours, and they’d like to dispense with the city activities altogether.

And parents? They are caught in the middle of all the confusion. Some schools – like ours – got the new program up-and-running quickly and provide good quality activities in the extra hours. Others schools have kids walking the halls with nothing to do in the extra hours.

So far parents haven’t taken to the street. But in the climate of general revolt in France at the moment, another protest may be on the horizon.