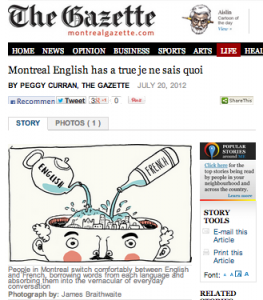 I love this piece Peggy Curran wrote in the Montreal Gazette about the emerging “Frenchified” English dialect of Montrealers: “Montreal English has a true je ne sais quoi”. It’s always fun when a journalist holds a mirror to your own linguistic peculiarities. For those of us who live and work in French, code-switching really is about as natural and unconscious as…breathing.

But one point she made really struck me (and she’s citing an expert): the fact that English is now in the “socially inferior position” in Montreal.

I agree — in a way. I think it’s fair to say that all Anglophones know that the pulse of Quebec society beats in French, and that mastering the French language is mandatory for anyone who hopes to make a difference here, or just live a fulfilling life. Why else do so many of us send our children to school in French? Which of course, is why the population of the English schools boards is steadily dwindling.

The problem is: French-speaking Quebeckers don’t know it.

Just listen to how we talk!