Does the Spanish Word Toro Come from Latin? 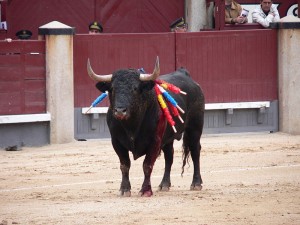 There has been some confusion as to whether or not the word toro (bull) originates from Latin. Toro is commonly believed to have come from the Latin taurus. However this is a general misconception. Like we explain in our book, The Story of Spanish (on page 10), the word toro comes from a pre-Roman language of Spain.

The Spanish philologist Rafael Lapesa writes, on page 47 of Historia de la lengua española that “The list of words of Celtic or pre-Celtic origin includes substantives that refer to the land.” He then presents a long list of words that includes puerco (pig) and toro. He explains that the two terms appear in an inscription engraved in the religious site of Cabeço das Fraguas, in Portugal, where they are written as porcom and taurom which “anticipates the latin porcus and taurus.”

Simply put, Latin, like Greek, Celtic, Germanic and Sanskrit languages, belongs to a family of languages called Indo-European. The source of these five languages is a hypothetical culture that is thought to have existed in 8000 BC in Turkey, and then fanned out in many different directions spawning many tongues. That explains why a number of words used in domestic life and agriculture in these languages bear uncanny resemblances. The Spanish toro resembles the Latin taurus, as well as the Greek tauros and the Celtic tarvos.

There is no doubt that it is a pre-Roman term. It is also worth mentioning that languages like Basque, Finnish and Hungarian are regarded as pre-Indo-European because their roots predate the Indo-European phenomenon. However, the word toro is not pre-Indo-European, it is simply pre-Roman.

More information about the origins of Spanish words can be found in our book, The Story of Spanish.

Next post The Story of Spanish Montreal Book Launch