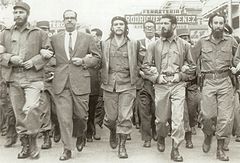 January 1st marks the 54th anniversary of the end of the 1959 Cuban Revolution that ended five years of brutal revolutionary war. But it also marks the beginning of a new chapter for Spanish in the United States. The Cuban Revolution triggered the migration of over one million Cubans to the U.S. Those immigrants would go on to be one of the most dynamic, influential and entrepreneurial Hispanic groups in the U.S.

The relationship between Cuba and the U.S. has never been smooth. In the first decade of the 19th century, president Thomas Jefferson dreamed of annexing Cuba. The largest, most populous island of the Caribbean and only 140 km off the coast of Florida, Cuba was regarded as a natural appendage of the United States. In 1848, president James Polk tried to purchase Cuba for 100 million dollars (worth 3 billion today), but Spain refused to part with the island.

The United States watched closely as Spain brutally repressed two insurgencies in Cuba in the 19th century – partly to ensure neither the French nor the British would get their hands on the island. Cuba produced 40% of the world’s sugar and up to 8000 Americans were involved in the sugar, tobacco, mining or railway industry. New York City became a refuge for Cuban independentists and students, many of whom brought American customs back to the island – starting with baseball, which became a symbol of Cuban nationalism.

Cuba was the main reason Spain and the United States fought the Spanish-American War in 1898. The war began when the U.S. battleship Maine exploded in the port of Havana in February 1898, killing 266 U.S. soldiers. Although the explosion’s actual cause has never been established, the U.S. quickly sought revenge. Two months later the U.S. declared war. After 10 weeks of fighting, the U.S. had possession of everything that was left of the Spanish empire, including Cuba, Puerto Rico, the Philippines and Guam.

Formal U.S. control over Cuba only lasted three years and the U.S. granted Cuba independence in 1901. But the U.S. government retained control over Cuba’s finances and foreign policy and Americans continued to intervene for the next 58 years – until it became obvious that Batista’s regime could no longer hold on to power. 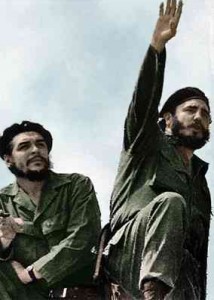 It’s curious, because on paper, the rebel commander, Fidel Castro, should never have won the Cuban Revolution. At times he commanded as few as 200 guerrilleros fighting an army of 60 000 to 80 000 men, albeit poorly trained and poorly equipped. But after a series of stunning military defeats, Cuban dictator Fulgencio Batista panicked and fled to neighboring Dominican Republic, conceding victory to Fidel Castro’s “July Movement.”

No other single event since the Mexican Revolution had created such a wave of hope in Latin America. The Cuban Revolution demonstrated that it was possible to overthrow a dictator and defy foreign interests. Revolutionary movements flared up everywhere.

A half century later, Fidel Castro’s revolution and dictatorship remain controversial. Castro’s authoritarian regime is one of the oldest surviving dictatorships in the world, and civil liberties and basic human rights abuses in Cuban are constant.

On the other hand, progress in health and education are undeniable. Cuba’s health and education systems are among the best in Latin America. Since 1960 Cuba has been famous for its medical diplomacy. According to scholar Julie M. Feinsilver, in 2008, 30 000 Cuban doctors and nurses were working abroad in 70 different countries. The Bolivian soldier who shot and killed Cuban revolutionary leader Ernesto “Che” Guevara in 1967 had his eyesight saved by a Cuban doctor.

Since the Cuban Revolution, the United States has been a refuge for over a million Cubans, who arrived in two large waves, first in the 1960s, then in the 1980s. These Cuban refugees were treated very well in contrast to other Latin Americans immigrants. They benefitted from special laws entitling them to automatic refugee status and public assistance, Medicare, free English courses, scholarships and low-interest college loans. Some U.S. banks even pioneered special business loans for Cuban exiles who had no collateral or credit, which enabled them to quickly secure funds to start businesses.

More information about post-colonial Americas can be found in our new book, The Story of Spanish, to be released in May 2013, St. Martin’s Press.

Next post What Kind of French is Spoken in Quebec?