Catalonia: A Long History of Difference 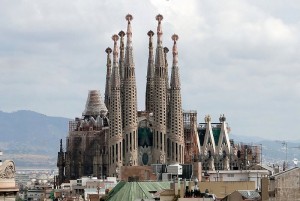 There’s nothing recent about Catalonia’s move towards independence. In fact, few may be aware of just how far back in history the roots of Catalonia’s “difference” go.

Catalonia has always been on the outskirts of Spain. Geographically close to France, it actually started out as part of France, 1200 years ago. The French originally founded it as a buffer kingdom to prevent Muslims, who ruled Spain at the time, from moving north and taking over France.

In its early centuries, the Catalan language also travelled a path distinct from the other tongues spoken on the Iberian Peninsula.  Catalan started out as one of a myriad of Latin-based Romance dialects spoken in the dozens of duchies and kingdoms that covered the Iberian Peninsula. In the Middle Ages, the Kings of Castile gradually conquered Spain during the Reconquista and drove out most of the other languages spoken on the Peninsula, in favor or Castilian. The Catalonians, along with the Basques and the Portuguese, were among the few groups that managed to keep the Castilians at bay.  So their languages survived.

Throughout the Middle Ages, as the Castilians kept spreading their power throughout the Iberian Peninsula, Catalonia continued to elude Castile’s control. At the beginning of the 18th century, one Castilian king tried to change this. Spain’s Felipe V understood how language could help him in spreading his own power. So he outlawed Catalan as an administrative language, forbade its teaching, and stripped Catalonia of its capacity for self-rule. Predictably, the language declined.

Yet Catalan rebounded thanks to plain economics. Only Spain’s Northeast and the North were developed enough by the late 18th century to enter the Industrial Revolution (the rest of the country had been stifled by centuries of short-sighted rulers). In the second-half of the 18th century, thanks to the presence of lignite (a type of coal), Barcelona rose as a textile production center and Catalonia became an industrial powerhouse.

By the 19th century, Barcelona was the economic and industrial locomotive of Spain. As such, it attracted many families who produced some of the most famous figures in Spanish (and Catalan) art, like Picasso, Miró, Dalí and Gaudí.

Although Andalusian by birth, Picasso (1881-1973) came to Barcelona at age 14, after his father, a painter, moved there to work at the School of Fine Arts. Picasso spent his formative years in Barcelona and always regarded it as his home. Picasso was influenced by the great architect Gaudí and paved the way for other Catalans, like Salvador Dalí (1904-1989) and Joan Miró (1893-1983), who matched Picasso in importance, if not reputation.

The prospects of the Catalan language looked good in the early decades of the 20th century when Spain’s Second Republic, elected in 1931, gave substantial autonomy to the Basque country and Catalonia.

But that didn’t last long. When General Franco took power in 1937, one of his key policies was the eradication of regional languages. Under Franco, Castilian was the only language that could be used for official purposes: all government, notary, legal and commercial documents had to be written in Castilian. Documents in any other languages were deemed null and void. Road signs and store signs had to be in Castilian, and schools could only teach in Castilian. Franco went as far as forbidding non-Castilian names. A new mother in Catalonia could not name a newborn Jordi (George): he had to be Jorge. In 1968, Joan Manuel Serrat was forbidden from singing the song La La La in Catalan at the Eurovision Song Contest. He refused to sing in Spanish. Even after dropping out of the contest, Serrat went on to become the biggest name in Spanish and Catalan singing to this day – comparable to Charles Aznavour in the French-speaking world.

But in trying to stamp out the influence of Spain’s regions, Franco’s policies backfired, triggering extremely brutal Basque terrorism –starting in 1968 – and spurring a nationalist movement in Catalonia. In 1958, Catalan exiles in Mexico had created a Catalan government in exile – five years after Basque nationalists did the same. In the 1990s the European Union unofficially recognized Catalan as a European language and Catalan cultural production in television and printed press became increasingly present.

Meanwhile, a Catalan literary agent by the names of Carmen Balcells launched the careers of almost every key writer of the Latin American Boom generation, including Carlos Fuentes, Julio Cortázar, Asturias, Vargas Llosa, Gabriel García Márquez, plus Pablo Neruda, Isabelle Allende and more. Few other literary agents can boast having represented six Nobel Prize winners like Balcells, who retired at 70, in 2000.

Catalonia’s independence movement is not the only thing it shares with Quebec: Catalonia’s language protection laws, in place since the 1990s, were inspired by Quebec’s language to protect French. There is also an academy of the Catalan language, modeled on the Real academia española, which produces an official dictionary of Catalan. Its first edition came out in 1932, and the 2005 edition has 70 000 words.

Yet while the departure of Catalonia – whose population represents a quarter of Spain’s total – could be an economic disaster for Spain, it won’t have much effect on the Spanish language. Catalan itself has never been a threat to Spanish: the number of unilingual Catalans, Basques and Galician combined represents less than 10% of Spain’s population. (Spain, for that matter, only represents 10% of the Spanish speakers in the world.)