Excerpt taken from the book The Story of French (Ch. 10) 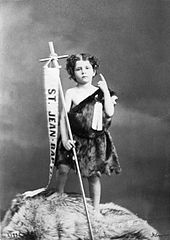 The movement spawned a wide array of symbols, some of which, such as the maple leaf and the beaver, went on to become Canadian emblems. The Societé St-Jean Baptiste even devised the anthem, “O Canada,” that eventually replaced “God Save the Queen” as Canada’s national anthem in 1980. Their flag–blue with a white cross and four fleurs-de-lys– became the flag of the province of Quebec in 1944 and the official symbol of all French Canadians.